The Robinson family were a wealthy family who moved to Knapton from the London area.
In Whites Directory of Norfolk, George owned land in Knapton including the area known as The Grove.
Sometime in the early 1800’s he built Knapton House for his family and also built Knapton New Hall.

George Robinson was an optics expert in London in the late 1700’s making parabolic reflectors from his factory at 24–25 Long-Acre Street in East London.  These consisted of small facets of silvered glass (pieces of mirror) set in plaster of Paris which reflected the candles in lighthouses and were first used in about 1763.   To produce a revolving or flashing light, the reflectors were fixed on a revolving carriage having several faces.

Robinson began working with Thomas Rogers in 1786 and formed a lens, lantern and lamp company.  Beginning in the 1790s, their company became the chief supplier of reflectors and lamps to Trinity House, the British Lighthouse Authority.  Rogers left the company to work in Ireland in 1792 and George Robinson became sole proprietor.  The Robinson Company eventually took in 13 year old Robert Wilkins as an apprentice and later as a partner and the company became known as G. Robinson & Wilkins.

Beginning in the early 1800’s George Robinson also took on the additional responsibility of the Chief Inspector of lighthouses for Trinity House.

George Robinson built Trinity House’s Flamborough Head Lighthouse (seen on the right) in 1806 and went on to to supply the reflectors and lamps for a number of British lighthouses notably: St. Agnes, Longships, the Lizard, Hurst Castle, Dungeness, Orfordness, Tynemouth, St. Ann’s, the Smalls and the South Stack.  His equipment was also used in the first Australian lighthouse at Macquarie and at the Heligoland Lighthouse in Germany that was owned at that time by the British. 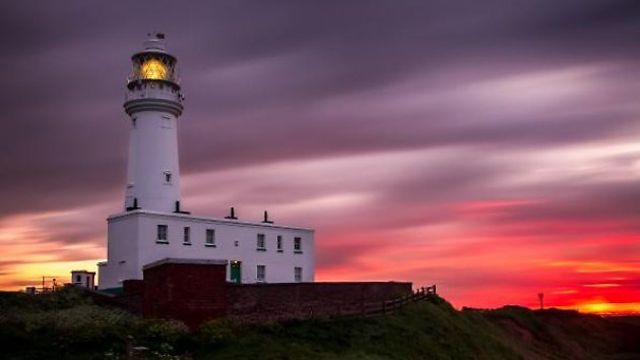 George also invented the Foghorn, or Siren, being the first to construct an instrument by which successive puffs of air under pressure we ejected from the mouth of a pipe.   He obtained this effect by using a stopcock revolving at high speed in such a manner that 720 pulsations per second were produced by the intermittent escape of air through the valves or ports, a smooth musical note being given.
We found this on the 1911 website of the Encyclopaedia Britannica.

The most powerful and efficient of all compressed air fog signals is the siren.   The principle of this instrument may be briefly explained as follows:  It is well known that if the tympanic membrane is struck periodically and with sufficient rapidity by air impulses or waves, a musical sound is produced.

By his improvements in the mode of illuminating Lighthouses adopted for the last half  century and extended to various parts of the world he has been the humble means through Providence of greatly diminishing the loss of human life by Shipwreck and of saving a vast amount of property to the mercantile and shipping interests of this and other countries.   For many years he filled the office of inspector of lighthouses to the Honourable Corporation of the Trinity House.   His upright conduct and generosity effectually conciliated the high regard and esteem of the circle of his friends and  acquaintance and his kindness of heart and benevolence to the poor were felt and acknowledged with gratitude by those around him’.

From the Norfolk Family History Group

George married Hannah Atkinson (daughter of Henry Atkinson, Attorney) in 1771 at Bacton
They four children, three daughters and one son
The daughters all married into the well-to-do Herring family of Norwich
The son, Henry, moved into Knapton House

George Robinson JP lived at Knapton House until his death on September 7th 1834 and is buried in a vault under the choir stalls in St Peter & St Paul’s Church, Knapton. 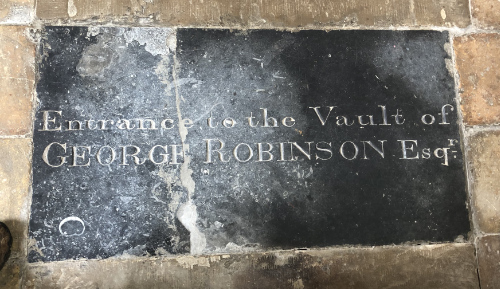 On the wall of St Peter & St Paul’s church, above the entrance to George Robinson’s vault, is the Vault Scroll (shown on the left) which names the other members of the family in the vault.

In a vault beneath are deposited the remains of George Robinson Esq. late of this parish who departed this life on the 7th day of September 1834 in the 73rd year of his age.

In the same vault beneath is his wife Hannah departed this life the 30th December 1857 in the 86th year of her age.

The only son, Henry, was Knighted by Queen Victoria in 1845 and lived in Knapton House from at least 1851 until his death in 1879 in Knapton.

Knight Bachelor – Created 1845 – Sir Henry Robinson, only son of George Robinson Esq of Knapton House, Norfolk by the eldest dau. of Henry Atkinson Esq of Bacton, Norfolk.  Born in London;  married 1842, youngest dau. of William Dodge Cooper Cooper Esq. of Toddington Park, Bedfordshire, was appointed in 1840 standard-bearer of the corps of gentleman-at-arms;  and in 1845 promoted to the rank of Lieut. on which occasion he received the honour of knighthood;  retired from the corps 1848;  appointed a deputy lieut. of Norfolk 1850.  Seat Knapton House 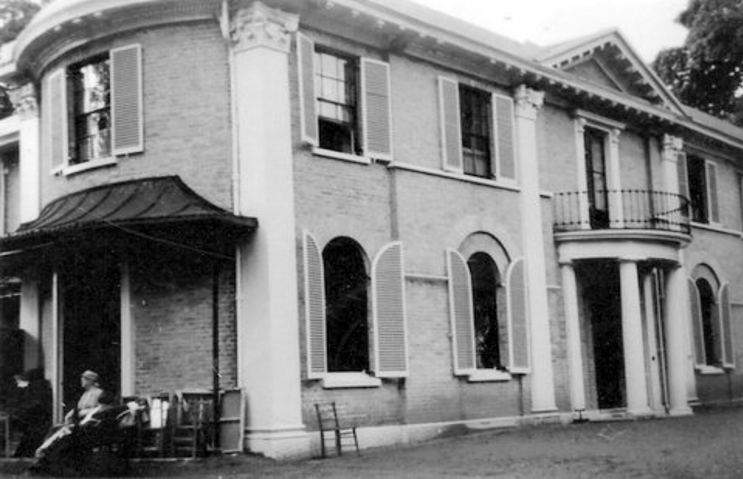 Henry and his wife, Margaret Lucy Ketton (daughter of John Ketton, of Felbrigg) had three daughters and one son

Three of their children had died young by the year 1901, which left Constance their only surviving child

Evelyn Rachel Lucy Robinson
Born 1877 :: Died January 25 1901 :: Aged 23 :: Buried in St Peter & St Paul’s Churchyard, Knapton
Engraved on her stone: Blessed are the peacemakers for they Shall be called the Children of God

If a child was not well she would take a gift, perhaps a book, and would take an interest in the family until the child recovered.

If someone was in hospital, she would write to them and keep the village informed about the patient.

At Christmas, every household would receive a gift from her.  Some examples of her generosity included a sack of coal, tins of tea, tins of fruit and other useful items.

Constance organised and collected for the Knapton Hospital Contributory Scheme.  This was an early form of today’s BUPA scheme which helped towards the cost of treatment at the Norfolk & Suffolk Hospital.

President of the Women’s Institute

A Magistrate at North Walsham

For many years she played the organ at Services and took weekly choir practices.

Together with her companion, Mary Leather, they ran the Sunday School which at the time was held in the Parish Rooms (now known as the Village Hall) and all the Christmas and Summer Sunday School parties were held at Knapton House.

Constance also allowed the Village Fetes to be held at Knapton House and got involved.

Constance could often be seen driving her Lanchester car around the village, apparently at a very sedate pace. 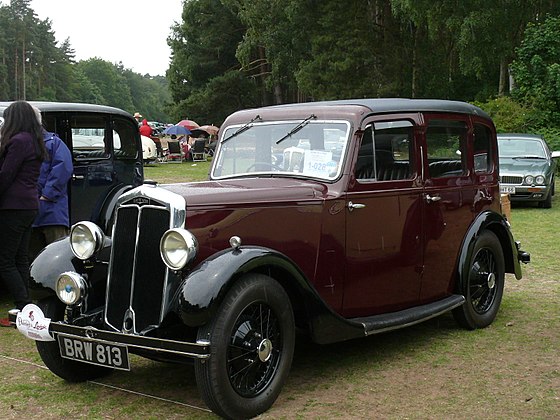 A Men’s Club was held in the Parish Rooms and a suggestion was made to have a Billiard Club.  Miss Robinson kindly allowed the members to use her billiard table in one of the wooden outbuildings which has long since been demolished and was opposite the Coach House   In 1949 she offered to donate the table if the men of the village would raise the money and build a club house.

The villagers set about holding many money-making events until they had saved enough to build their own Club House.   Mr David Cargill, a local farm owner, leased the club a piece of land next to the School House in Hall Lane as a suitable site for the building.   There were enough men in the village with the right skills to complete the work and in 1953 it was opened for business.

It was a men’s only club but of course exception was made for Constance (and Mrs Wild who cleaned the rooms and supplied the necessary refreshments) who would go to the Club House at the end of the Season and present the winners with their winning trophies.

Unfortunately, due to lack of support the Club closed in 2011 and the club house reverted back to the Cargill family. 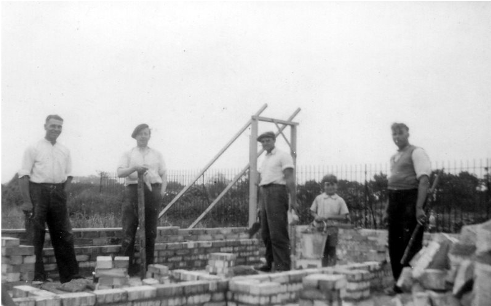 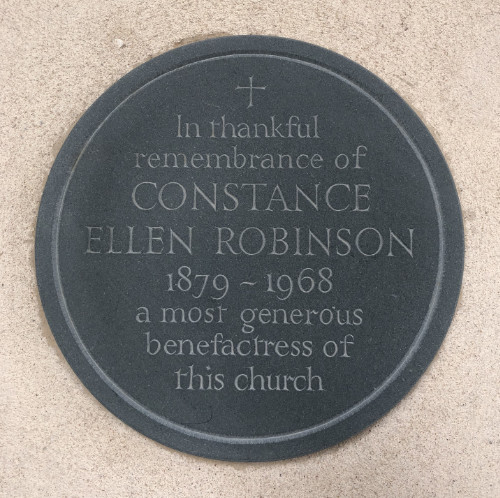 Constance lived on at Knapton House until her death in 1968.   She was mourned by all of the villagers that she had cared so much about and laid to rest in St Peter & St Paul’s churchyard in Knapton, beside her brother and sisters

This commemorative stone is in the bus stop in Knapton Green  > > > > > 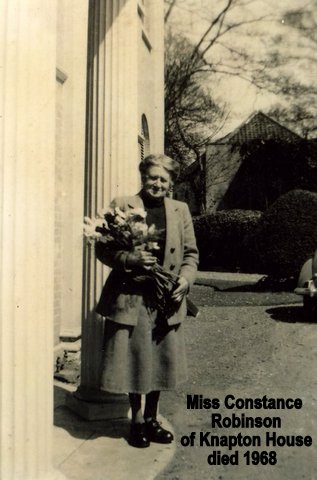 Her constant companion through the years was
Mary Florence Leather

Mary supported Constance until her death in 1968

When Constance died, Mary moved to 14 Marshgate, North Walsham, where she died in 1973

She is buried in the churchyard of St Peter & St Paul’s Church, Knapton close to Constance Robinson’s 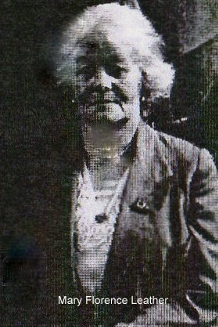 Mary Florence Leather was born in Hamilton, Ontario, Canada on the 23rd May 1881.

Henry Richard Leather was born on the 14th October 1852 at Hunslet, Yorkshire. According to the 1881 Census taken in Hamilton his occupation was given as Mechanic Engineer, age 28 years.

He married Mary Clarissa Russell in Portsmouth, England on the 18th September 1880 and the couple must have sailed just after this event to Canada because 9 months after the wedding their daughter was born in Hamilton.   Their son, Charles Richard Leather, was born in 1883 but Henry died in Marion, Ohio, USA the following year, on the 12thFebruary 1884.
Mary and her two children subsequently returned to England because the 1891 Census shows them living at Connaught Road, Portsmouth.

When the 1901 Census was taken the family were living in a house on Ordnance Row, with Mary Clarissa’s occupation given as Boarding House Keeper.   Mary Florence had no occupation given and the son Charles was a Merchant’s Clerk.

On the 1911 Census the two women were living in a 6-roomed house in South Lane, Woodmancote, Westbourne, Sussex.   They were living off private means.

The following is an excerpt from the Probate Records:

On the 7th February Mary Florence Leather was buried in Knapton Churchyard.   How well we all remember her, who, until a few years ago, Miss Robinson’s constant companion, was so much a part of Knapton life, both in the village and in the Church.

Here in the Church we recall her constant care for Altar linen, Alter flowers, for vestry and sanctuary, her work with the infants in the Sunday School, but it would be difficult to enumerate the many ways in which she was part of the daily life of Knapton and Knapton Church.   She had reached the age of 91 years.  Her grave too, is now in Knapton near Miss Robinson’s.