Funding in place… we’re off….

Now that the necessary funding is in place we have been able to instruct Highways to go ahead with the re-modelling of the junction.
The next stage is to have the briefs drawn up and arrive at a design that works for pedestrians, vehicles and the tractors & trailers of our farmers.

On 28th February 2020, Knapton’s Fête Committee emailed the Chairman of the Parish Council to confirm that it had made £7,000 available to contribute towards the cost of our Road Safety initiatives.

Good afternoon Peter
Following our meeting of the Knapton Village Fete committee we confirm that we have funds available to the tune of £7000.00.

On 9th March, Ed Maxfield, our County Councillor, confirmed additional funding of £3,000 to put towards the cost of the re-modelling of the junction.   As this will be coming from council funds, it is considered as immediately available by Highways.

On 3rd March 2020, the Chairman received an email from Peter Waplington of Flagship Group (Victory Housing).   In it, Mr Waplington confirmed his willingness to assist the PC in their efforts to re-model the junction.

The Site
Knapton Road is the main traffic artery between North Walsham and Mundesley and as such is a relatively busy road.  As the road climbs up to Knapton there is a 40mph speed restriction on the edge of the village which is all to often ignored by drivers.   A few hundred yards further on Knapton Road bends right to bypass the village and it is on the beginning of this bend that Hall Lane meets it.

The Problem
The location and design of the junction means that vehicles approaching the junction from Mundesley and entering Hall Lane do so without the need to make any discernible turn.   This may explain why a dangerously high proportion do so without slowing down, even though the speed limit reduces from 40mph to 30mph.   It may also explain why so many drivers fail to indicate as they assume that they are going straight on so don’t need to.
With the additional housing being built in Mundesley, this problem is only going to get worse and puts other road users and pedestrians at risk because there are no pavements at this end of Hall Lane which walkers could use to evade vehicles. 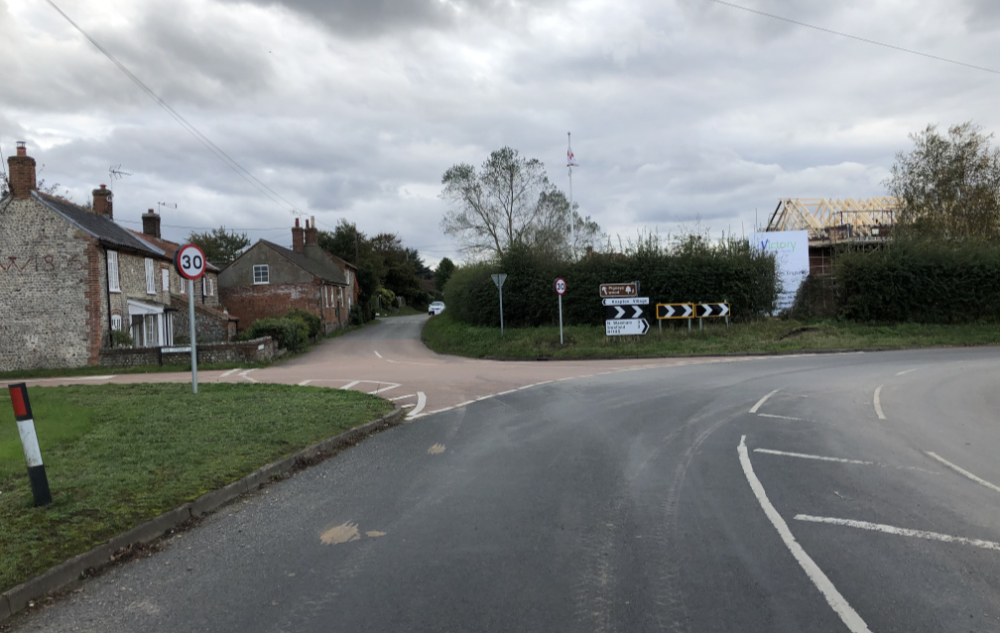 This junction has long been a cause for concern for villagers and locals alike,
and with so many new houses being built in Mundesley and with Wilds Way completed just yards away, this potentially dangerous junction will only get busier. 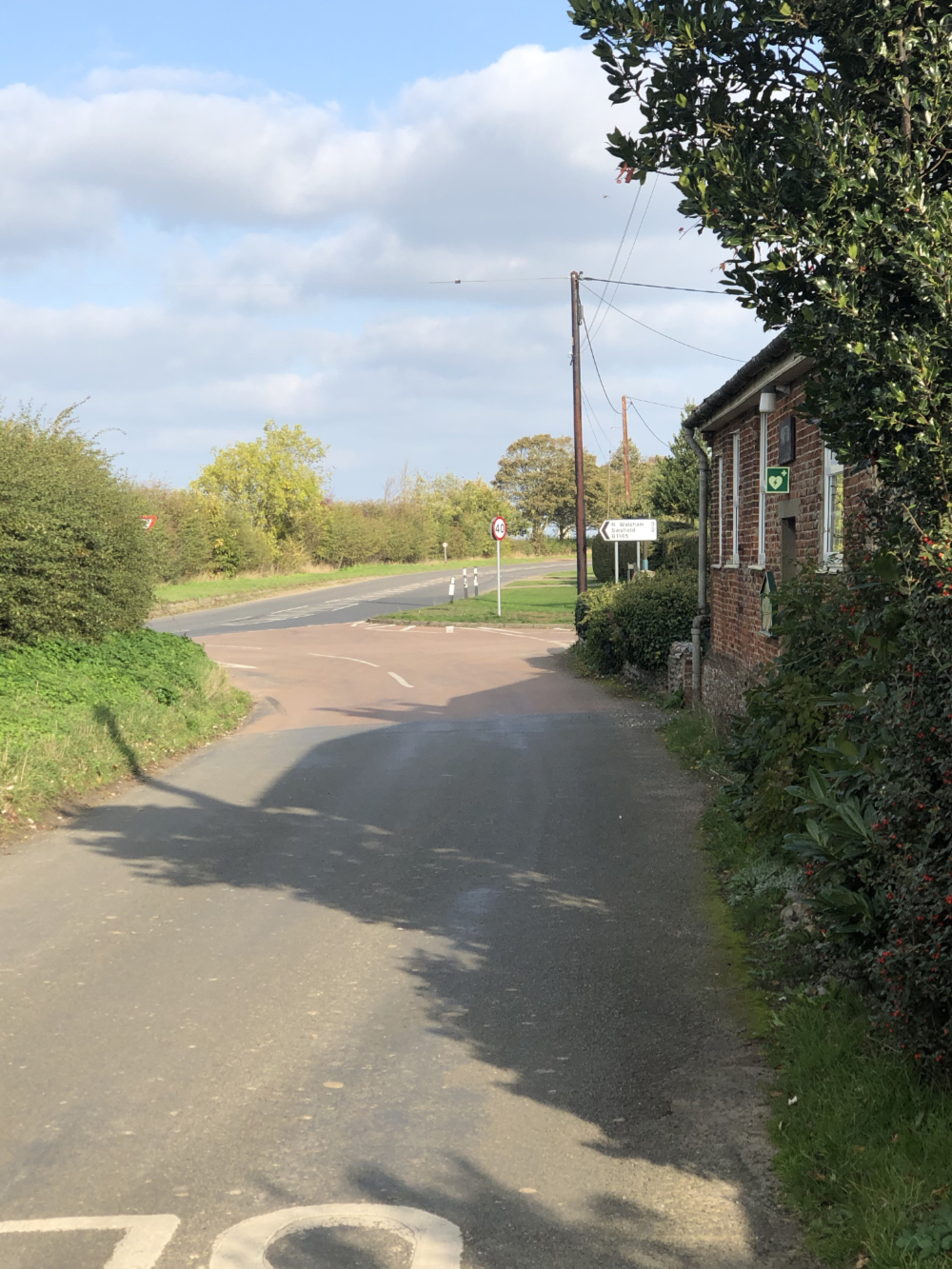 .
No pavement for pedestrians to escape oncoming traffic that ignore the reduced speed limit

Our Aim
The speed limit changes as vehicles enter Hall Lane from Knapton Road from 40mph down to 30mph and for the first 200m there is no pavement either side of the road.
We want to make a change to the design of the junction to;

Our Method
Since an alarmingly high number of drivers approaching the junction from Mundesley are already ignoring the speed limit reduction (see details of our resident’s Speed Watch action) and some drivers from both directions are risking the safety of other road users and pedestrians alike by clearly not respecting the junction, the only way forward would seem to be to change the layout of the junction in such a way as to force them to slow down or stop.   We also want to see additional signage both on the road and on roadside signs.

We have spoken with Highways who are sympathetic to our view and have even provided their thoughts on possible changes to the junction.

During our meeting with the Police and Highways, PC Gwynn drove us to the junction and approached it from all aspects.   He said that anything that could improve safety for road users would be a good thing.   Steve White of Highways suggested that change could be possible and that he would talk to a colleague who was more specialised in junction design.   He also pointed out that although this would be subject to Highways approval, there is no budget available for this type of work and that the Parish Council would have to fund it, though he did suggest that the builders of the new estate on the Millennium Field, Victory Housing could – and possibly should – contribute, as the additional housing would obviously add more traffic on the junction.

He emailed the committee a day or so later to advise that he had spoken with his colleague and that not only was it feasible but that his colleague had offered one design suggestion (click on the map image > > >) and would be happy to consider others.

This has left the committee feeling very optimistic that we can make a difference to what has become a dangerous junction and we are currently discussing designs that will have maximum effect with a view to obtaining Highways approval.

As yet we have no idea of time scale but subject to funding, this could be measured in weeks or months as opposed to years.

Got anything to add?
Want to have your say?
Good, then go ahead and click the button below and select Road Safety Blog from the Subject list
…and don’t forget to give us permission to publish it…