In 1881 the architect, Sir Gilbert Scott, was brought in to arrange for the restoration of the Church.   As a result of his inspection a great number of projects were undertaken but no work was carried out on the bells.   The Church was reopened on Sunday, September 9th, 1883.

50 years after this restoration work was carried out the bells were sent to bell founders, Messrs. Gillett & Johnston.   Their Croydon factory was one of the first steam-powered clock factories in the world and in 1868 the well-known clock tower at the factory was built as a working advertisement.   They are now in Bletchingley.

The three trebles were recast in 1932 and were rehung on a steel frame for six bells. 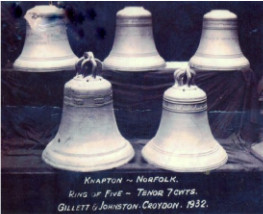 The weight and inscriptions of the bells are as follows

Installed on the 16th June 1991, the bell was a donated by a lady in remembrance of her Grandfather and has an inscription cast on the bell.

According to Dove’s Guide for Church Bell Ringers, the authoritative source for current information about rings of bells since 1950, we have 6 bells in fine working order.

It shows various details of the bells, including their weight, note, diameter and who the founder was.
Apparently they were last overhauled and tuned in 1932.

There is also a recorded list of all the peels rung, recorded by the Felstead Database, whose aim it is to list brief details of every towerbell peal that has been rung by recording historical evidence received, or obtained from, current sources such as BellBoard, The Ringing World and PealBase.

It shows that Knapton has 14 valid peals, the oldest dating back to 1934 and the most recent dated 5th January 2019.

St Peter & St Paul’s is affiliated to the Northern Branch of the Norwich Diocesan Association of Ringers (NDAR) which promotes bellringing throughout the diocese by:

The branch publishes a newsletter called Soundbow, periodically and you can download all the editions dating back to 2005 by clicking here.   Enjoy!

Practice times
Usually every 1st, 3rd and 5th Monday of the month at 7:30pm.
Please check with Andrew for any changes or additions to this schedule.

Membership
The number of members has slowly dwindled over the years, from twelve in 2002 down to six in 2018, so it’s very likely that any budding campanologist showing interest in becoming involved would be welcomed.

Isn’t a bell-ringer a campanologist?   well… no.

It’s estimated there are about 40,000 bell ringers ringing on rings of bells in England.   A ring of bells is the name bell ringers give to a set of bells hung for English full circle ringing. The term peal of bells is often used, though peal also refers to a change ringing performance of more than about 5,000 changes.