The Knapton Men’s Club was born at a meeting held in what is now the Village Hall, on 2nd November 1938.
Although only 30 men attended the inaugural meeting, the first list of members totalled 48.

Extracts from the Minutes Book of the inaugural meeting in 1938

2nd November 1938
A meeting was held in the Parish Room (today’s Village Hall) to form a Men’s Night Club.  About 30 men present.

16th January 1939
Committee Meeting to make arrangements to hold a whist drive and dance from 7.00pm – midnight.  It was agreed that Mr Watts of Mundesley would print all posters and tickets and also to check if Burton’s Band was available for the evening.   Price for the event  including refreshments would be 1s 3d (around 6p in today’s money)

12th April 1940 – AGM
Treasurers Report shows balance of £6 19s 6d.   £4. to be spent on fellow parishioners serving in H M Forces.   A parcel of cigarettes to be sent to each serving man and any surplus to be handed to Knapton Working Party for the troops.
This was carried unanimously.
A week later it was proposed that a money order be sent to the 13 men of the Parish serving in H M Forces which was carried out.   This cost, with postage, totalled £3 2s 0d leaving 18s 0d. to be handed to the Knapton Working Party.

18th October 1946
Subscription to be increased this year:

16th December 1946 – AGM
Mr May and others had visited Miss Robinson (the owner of Knapton House) in regards to a loan of her Billiard Room.  She was very pleased to be able to help the Men’s Club and gave her permission.

Donations made towards a raffle price (a pig) to be held at Church Farm from Miss Pain, Mr Fisher, Mr Burlingham and Mr Guyton

About £9 5s 0d was needed to install electric light in the room and a whist drive was held on 3rd January 1947 to meet the expenses.   The Billiards Club opened in September 1947 on the evenings of Tuesday & Thursday and entered the Alby & District Billiards League with their league games starting on October 9th.

In March 1949 Miss Robinson told the Committee that if the Men’s Club chose to work and build a place of their own, she would present them with her billiard table.   This offer was gratefully accepted. (note: the billiard room was where the dwelling Camelot is today).

Miss Robinson also offered the grounds of Knapton House to hold fêtes and a whist drive and barn dances were also held in Mr May’s barn at Church Farm to raise money for the new club building to house the billiard table.

Darts League
A Dartboard has been lent to the Club by Miss Robinson.
It is to be checked to confirm it is suitable for League matches.

Early in 1949 Mr David Cargill at Gimingham, who farmed at Old Hall Farm, Knapton, was approached to see if he would sell some land to build the new club house.      He agreed to give them a 99 year lease on a piece of land adjacent to the Old School House.  The offer was accepted by the club.

Until the opening of the new Men’s Club building the members of the club worked hard both fundraising and building their own premises.  They held whist drives, dances at the village hall, barn dances in Mr May’s barn at Church Farm, and billiards and darts tournaments to raise funds.

Burton’s Band, seen on the right, played at their dances.

1st June 1949
Application for building the club house had been submitted and certain work could commence straight away.

27th September 1949
Owing to a shortage of bricks and labour the new building was not progressing as fast as first hoped for, but as harvest was nearly over, it was expected that there would be an improvement.

Cost of the new Club premises

The rules laid down by the Committee were as follows: 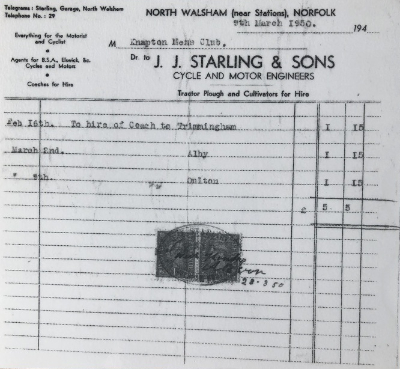 It was agreed that this be played for each season by holding an American Billiard Tournament.

12th December 1952
It was decided to plant two trees on Coronation Day, with Mr Cargill’s permission, on either side of the entrance to the club house. 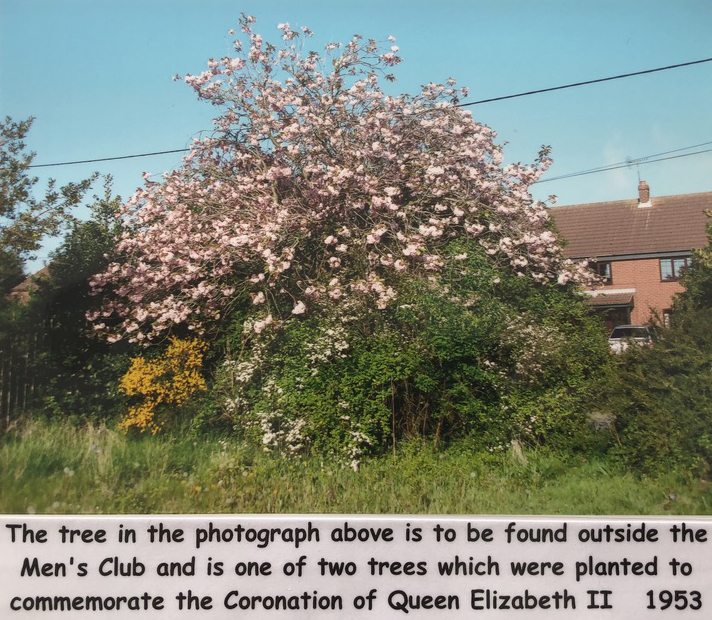 TRUSTEES: That Mr S Wright be elected as a Trustee to replace Mr May of Church Farm who had recently died.  It was agreed that the Secretary and Mr W Wild would attend the next meeting of the Alby League Meeting.
It was agreed that Mr C Wakefield of Itteringham Club be nominated by the club.

Reference the Annual League Meeting: The Club would put forward a resolution that at league games all Clubs should mark an equal number of games and it be left to this Club’s representatives to vote on any other League Rules.

Presentation of Guyton Cups:  That the presentation would take place on April 8th and that a Tournament take place. Mr Guyton (White House Farm) to be asked to present the cups, failing that Miss Robinson (Knapton House) to be asked. 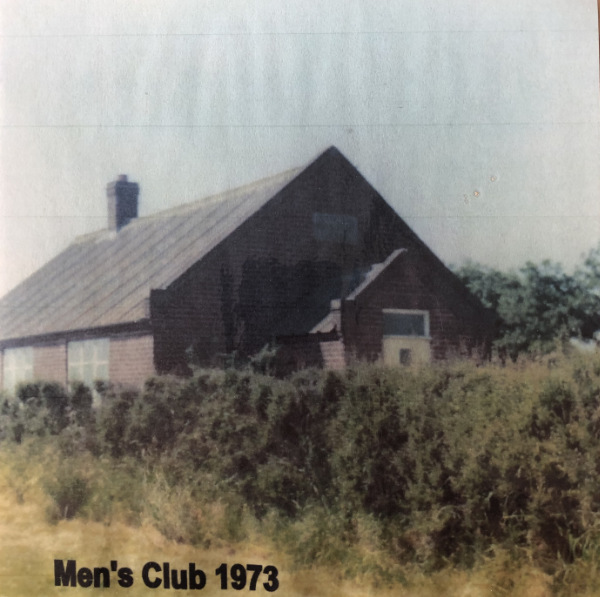 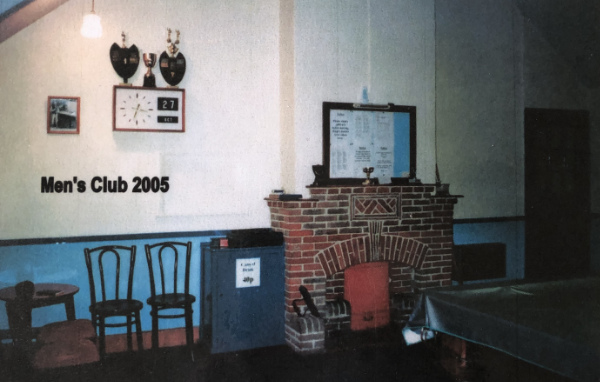 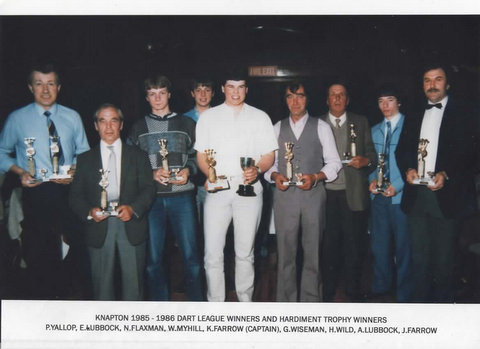 Transport
Club members playing league games away from home to pay 2/- (2 shillings – equivalent to 10p today) a head towards the cost of transport.

Club funds to pay the difference. 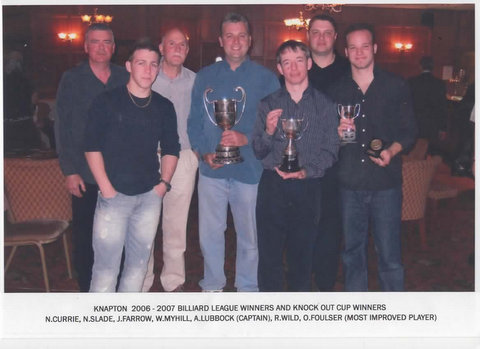 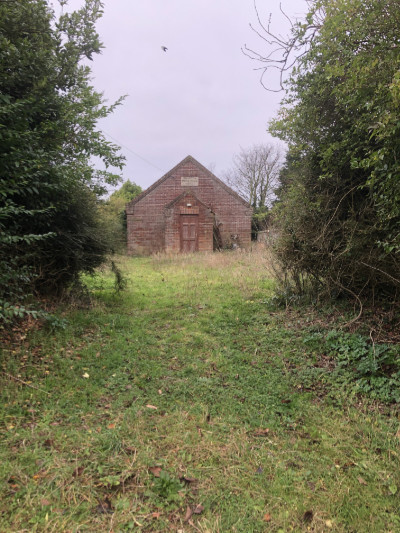 The club continued to be used until 2012 when, due to lack of support, it had to close down.

The (Billiards) table was disposed of by one of the Trustees of the Club, Andrew Lubbock, and the hall and the land passed back to Mr Alan Cargill, David Cargill’s son.

In 2019 planning permission was sought to turn the building into a private dwelling.

After carrying out the normal practise of consulting the immediate neighbours, the Parish Council has approved the plan but have indicated their desire for the “new” building to retain the date stone, in memory of a irreplaceable piece of Knapton’s history. 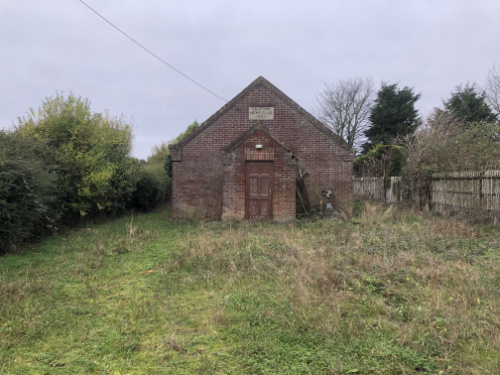