Visiting Knapton church is an astonishing experience.   As soon as you walk into the church interior your eyes are drawn up to the soaring roof high above your head. The sheer number of ornately carved and painted angels is staggering, and the quality of the craftsmanship is awe-inspiring. 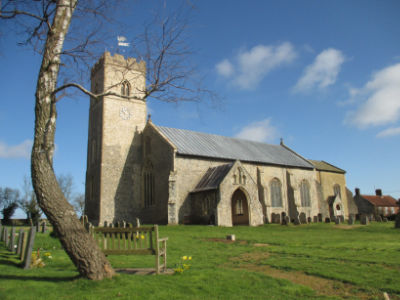 A Grade I listed building, our church dates from mainly the 14th century, though it has seen many changes and additions over the centuries.

The fabric is largely of whole flints and there are still has some areas of original render.

The tower, which is set to the north west corner of the building, is of knapped flints and is set to one side, probably to allow the church to have a great west window which apart from looking glorious, has the practical use of illuminating the nave. 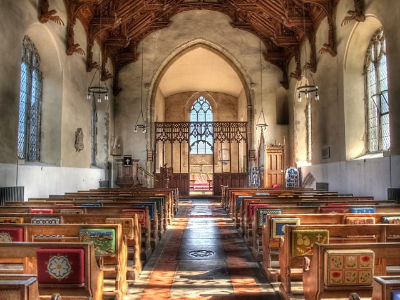 The 14th century south porch has a triple niche above with cusped ogee arches, remarkable for its day.

There was almost certainly an earlier church on this spot as evidenced by the oldest historic feature in the church, a 13th century octagonal font in its traditional position opposite the doors.   Up three high steps is the Purbeck marble bowl with typical shallow arcading.

It has a wooden cover carved in 1704 which bears a Greek inscription reading ‘NIYON ANOMHMA MH MONAN OYIN‘, which translates as ‘Wash thou, not only my face, but my transgression’.

The inscription is a palindrome, reading the same backwards as forwards. 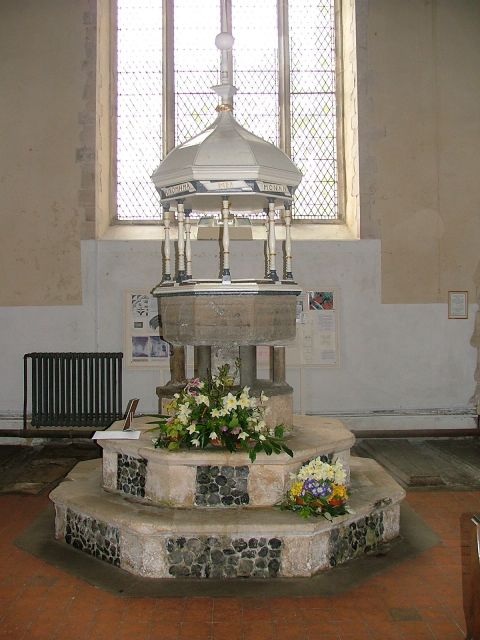 The chancel was greatly embellished by the rector John Smith who, in 1504, gifted the church its magnificent double hammerbeam roof which still retains its original colour today  (see below)

The beams and spandrels are richly carved with three tiers of angels which have outspread wings, with more angels carved on the king-posts and on the wall plate, collectively known as the Knapton Angels  (see below)

In niches below the wall supports there are figures with scrolls, shields, symbols or musical instruments.

On the west tower there is a weathervane designed by J.S. Cotman an artist famed as a member of the Norwich school  (see below)

Description…
This conservation-base research and analysis report forms part of the investigative stage of grant-aided repairs and development.

In English…
This nineteen page report provides a good general overview of the church as it was in 2014, doffing its cap towards its history and noting those areas that perhaps could use some TLC. 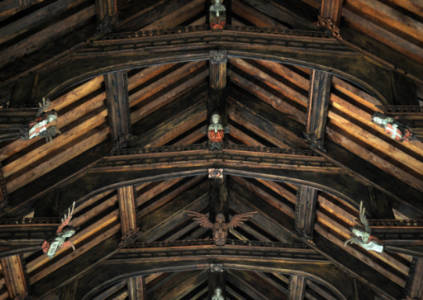 There are 138 carved and painted figures of angels flying over the hammer beams that support the roof.

At the base of the wall posts (i.e. just under the roofline at the top of the walls) runs a freize of angels with their wings outstretched. These angels date to the 1882 restoration, and are noticeably in a different style to the early 16th century angels above them.

It is said that the Puritan, William Dowsing, empowered by the 1643 Act of Parliament to destroy all Church altars, pictures and images only failed to destroy Knapton’s Angels because the church roof is so high, his men could not reach them.

Made in 1503, this stunning piece of late medieval craftsmanship is one of the finest in England.

It derives it’s name from the truss roof system which is supported on corbelled blocks projecting from the wall.  It also has collars (ties that connect the main rafters close to the roof apex) which are rare in Norfolk but common in Suffolk, lending credibility to the idea that Knapton’s roof was made there and transported along the east coast by ship to Mundesley, then inland to Knapton.

It is 70 feet long and over 30 feet wide and is without doubt one of the finest examples of a timber roof in the country, a masterpiece of art in carved oak.

Yet local tradition suggests that the roof may not have been intended for Knapton at all, but that it was salvaged from the wreck of a transport ship just off the coast near Mundesley.

What is a Hammer Beam roof? 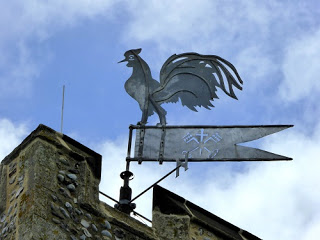 John Sell Cotman (16 May 1782 – 24 July 1842) was an English marine and landscape painter, etcher, illustrator, author and a leading member of the Norwich School of painters, who lived near Knapton.

He famously sketched the church and he designed the splendid Cockerel weathervane which sits on the top of the striking west tower when he gave a drawing lesson to the Robinson family at Knapton House.

Who was John Sell Cotman? 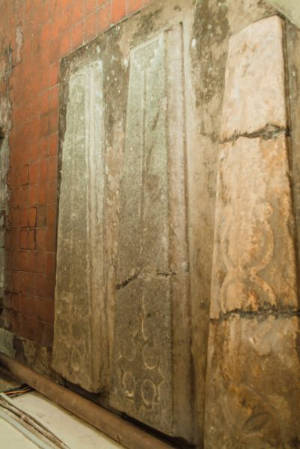 Our remarkable collection of high status memorial sculpture dates back to between c.1120-1250, which as a group in Norfolk at least is unique, and they all pre-date the present church at Knapton.

Purbeck marble, probably from the Barnack quarries near Stamford, was widely used for high-status coffin lids during the 12th and 13th centuries and would have been transported by river or sea.

Clearly of exceptional regional and local cultural significance, Skillingtons of Grantham were asked to compile a report on them in March 2016, which you can read by clicking the button below. 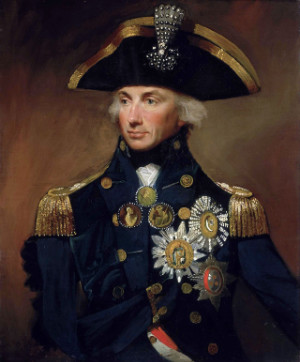 In the graveyard of St Peter & St Paul’s is a headstone in sacred memory of Commander Jeaffreson Miles of the Royal Navy, the Vidicator of Nelson.

In 1843, the same year that Nelson’s Column was erected in Trafalgar Square, he wrote his pamphlet (which was the size of a small book) entitled;
Vindication of Admiral Lord Nelson’s proceedings in the Bay of Naples

He was defending Nelson’s reputation which had come under increasing attack when Charles James Fox, leader of the Whig (forerunners of today’s Liberal Party) opposition, quoted letters in Parliament in 1800 about alleged atrocities that were said to have taken place in Naples in 1799.   These letters were compiled into a book by Helen Williams, a pro-republican, and the attacks became known as the Black Legend.

So what happened in Naples?
As always, there are two sides to every coin, so we’ve put together a shortened version…

Horatio Nelson was the unchallenged master of war at sea during the Napoleonic Wars and has been celebrated ever since as the greatest sea warrior in British history.

He was born on 29th September 1758 in Burnham Thorpe, Norfolk, less than 35 miles from our village.

He gave his life winning his greatest victory at Trafalgar on 21st October 1805, ending the greatest threat to Britain and her world position and was transformed into a national deity. 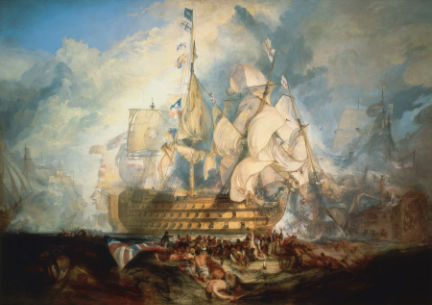 There is an excellent book by Jonathan North called Nelson at Naples, Revolution and Retribution in 1799 which is the result of many years painstaking research by a descendant of Nelson himself and reaches some surprising conclusions at to what exactly happened in Naples, in 1799.

View the book on Amazon

During the wars which followed the French Revolution, France’s armies turned on Britain’s last ally in Italy, the kingdom of Naples.   The revolution at Naples was a fascinating but rather bloody episode.   The armies of the French republic had chased out the Bourbon royal family and established a liberal government of doctors, lawyers and intellectuals. They lasted six months in office before a ferocious counter-revolution, led by a militant cleric, Cardinal Ruffo, swept them from power.   His royalists exacted revenge in the streets or in the courts and on the scaffold.   Hundreds died or were imprisoned or exiled, and the kingdom banished its intellectual elite only to find its culture beheaded.

Set within that brutal history is a dramatic story of surrender and betrayal.

By June 1799, as republicans were being hunted through the streets and put to death, a significant number took shelter and were besieged within the forts of the capital.   They capitulated to the cardinal on condition they would be safely transported back to France, surrendered and signed a treaty.

It was at this point that Nelson arrived leading his British fleet and the admiral promptly rejected the treaty.   Bolstered by the support of Sir William and Emma, Lady Hamilton and with the vindictive Bourbons declaring that there would be no treaty with rebels, Nelson violated the treaty of surrender and annulled the armistice with the rebels.   He ordered a court-martial of Commodore Francesco Carocciolo who had commanded the treacherous side’s gunboats and then ordered that he be hanged from the yardarm of Nelson’s flagship, The Minerva, on the evening of 29th June 1799.

Through this controversial act and a tangled sequence of events, hundreds of Neapolitans, thinking themselves saved, now found themselves at the mercy of royalist revenge.

In Italy the event became synonymous with betrayal and Nelson’s honour was called into question by Charles Fox in Parliament.

Nelson’s biographer, the poet Robert Southey, went as far as to state that the episode was a deplorable transaction, “a stain on the memory of Nelson and upon the honour of England“.   G. K. Chesterton agreed, writing Nelson turned his blindest eye on Naples and on liberty and another writer later alleged that Lady Hamilton has persuaded Nelson to take her in his barge to view Carocciola’s corpse swinging in the breeze.

He served all over the world rising through the ranks and was a Lieutenant at the bombardment of Copenhagen and the surrender of the Danish fleet in Sept 1807 when he was included in the general vote of thanks by both houses of Parliament.

During his long and useful career, Cmdr Miles assisted in the capture of;

He was finally placed on the list of retired Commanders on 28th September 1843.

From this information, it is certain that he lived in Knapton with his family when he was not at sea on board ship and died at home in Knapton on 14th June 1844. 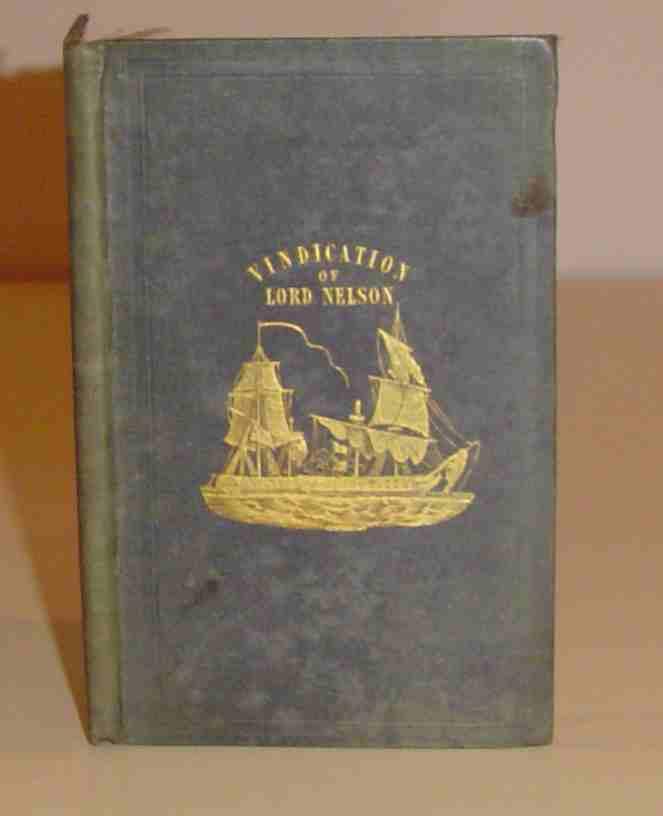 So the comments continued, each adding sensational colour and moral outrage.

Commander Miles recognised that the national hero was being attacked by ignorant, petty and stupid people, possibly for their own material gain, and felt that he had to speak out in defence of Lord Nelson’s actions.   His 60 page pamphlet made clear that;

It was published in 1844, just after his death.

…the ground has closed over one of England’s most zealous defenders.   His vindication of Lord Nelson’s proceedings in the bay of Naples was published a short time since, and can hardly fail of establishing it’s author’s object; it being a complete refutation the calumnious opinions but too generally received, based upon facts which no sophistry can shake
Gentleman’s Magazine, 1844 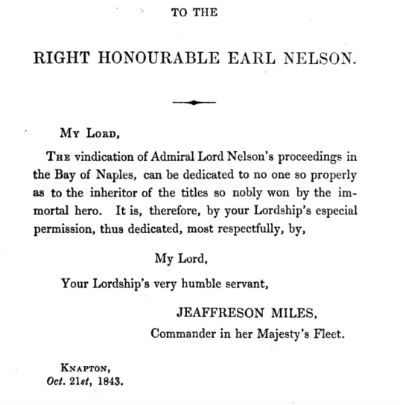 The Forward of his pamphlet, dedicating it to Admiral Lord Nelson, a man that Commander Miles clearly so admired and respected