Over the last few months we have noticed that the boards that were installed to prevent children climbing onto the roofs of two of the units were starting to peel.   So four members of the Parish Council went to the playground, armed with drills, saws and lots of new boards to replace them all.

Our thanks go to Alan for organising the job to be done, ordering the wood and then cutting it to size before delivering it to the playground.   And to Pat, Alan, Keith & Peter for giving up four hours of their Saturday to fit it all and make sure our village playground is safe for our children to play in.

If you’d like to make a comment or raise a concern about the children’s playground, or any other aspect of our parish, clicking on the button below will take you to our on-line Contact Form.

Selecting Playground or your chosen Subject from the drop down list (you can choose Something Else if there’s no better choice) ensures that your comment can be passed to the right person quickly and we will usually respond within 24hrs.

The children’s playground was re-opened on 1st July 2020

Safety checks are made on the playground each week by a member of the Parish Council, who competes the checklist on-site.   When completed, that information on that checklist is then uploaded to this web page.

However, if you notice anything strange or unusual about the playground area or the units themselves, please contact us immediately so that we can check it out. 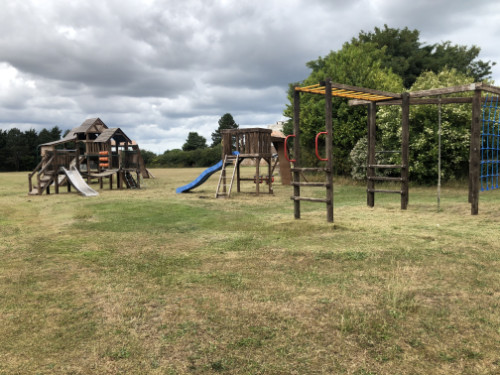 Please remember that the Covid-19 virus has not gone away completely and Government advice is still to maintain social distancing whenever possible.

Help us to keep the playground safe and stop the virus spreading by keeping to Government advice.

In accordance with Government advice regarding the loosening of lockdown restrictions on communal play areas, the Parish Council has re-opened the children’s playground.

We have cut the grass and carried out a thorough check to ensure the safety of those who use it.

The playground equipment is used by passer’s by as well as our own children, which is why we have re-opened it at the earliest opportunity. 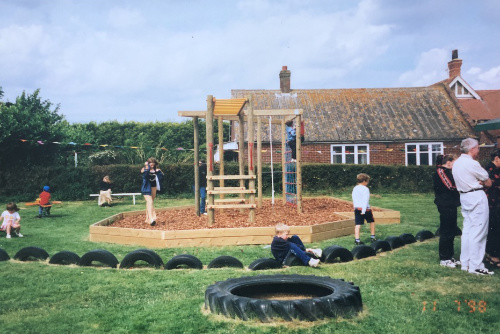 The playground when it opened in July 1998

Our children’s playground is now finally finished and the Parish Council has signed it off as completed.   We have brought it in right on budget and have already put in place a maintenance programme for the coming years to make sure it stays looking good and safe to play on.

A big thanks to the guys at ALS who have done a great job of refurbishing the older units and constructing the newer ones so that our children, and those that visit MADRA, have a safe area to play in.

This is a great example of the current parish council sweeping away the lethargy of years gone by and getting things done.   The committee setup to deal with it have done us all proud and a big thanks to Pat Lee, Alan Young & Peter Neatherway for rolling their sleeves up and making it happen.

We thought you might like to see some pictures of the finished playground
You can use the arrows on the left or right side to scroll the images or click on an image to open a bigger picture in a new page.

How we refurbished our village playground

The Parish Council has wanted to refurbish the children’s playground next to MADRA for a few years but funding has always been an issue.

Earlier this year the council managed to secure several grants as well as donations from Victory Housing and Bacton Power Station and set about; 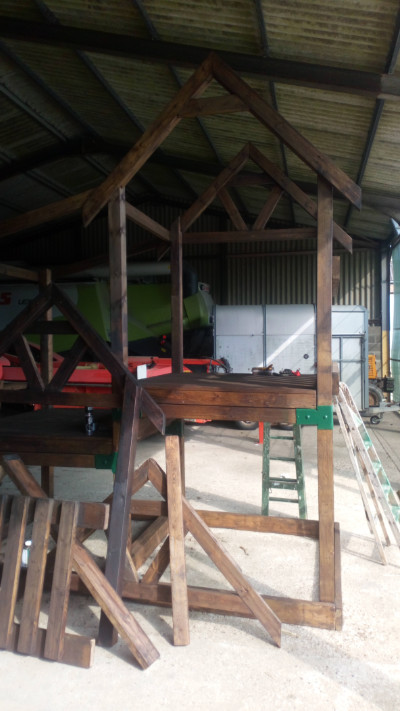 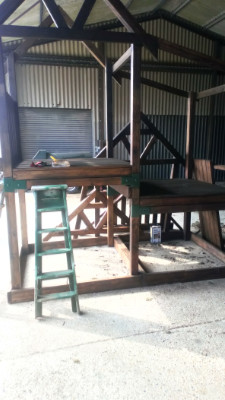 The work was carried out by the guys at ALS, trusted suppliers to Knapton Parish Council.

They collected the two new pieces of equipment which were kindly donated to the council by Steven Clarke of Paston Hall and took them to Church Farm where the owner, Steve Hammond, had very generously set aside some space in one of his barns so that the guys could carry out the necessary repairs and refurbishment.

The units were taken apart, stripped down and cleaned, fittings and fixing replaced, and then put back together as good as new. 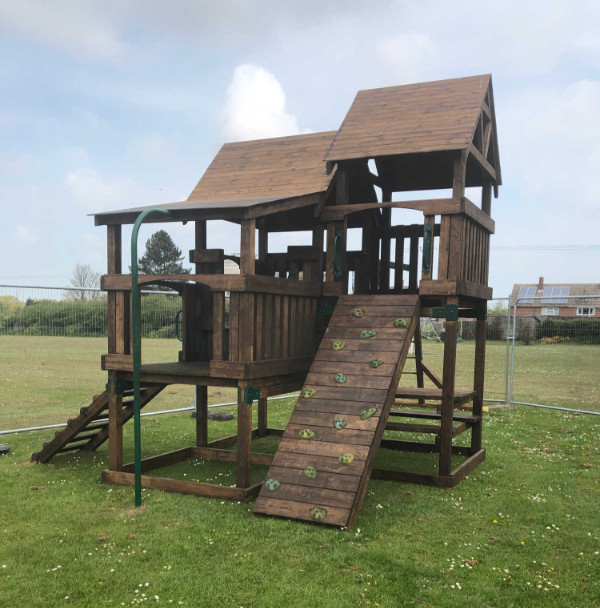 Once the refurbishment had been completed, ALS transported the units to the field and the playground area was sealed off while they were erected securely.

Then ALS turned their attention to the existing equipment and refurbished it, on site, to the same high standard.

The end result is a stunning looking playground with more equipment for the children to play on and enjoy. 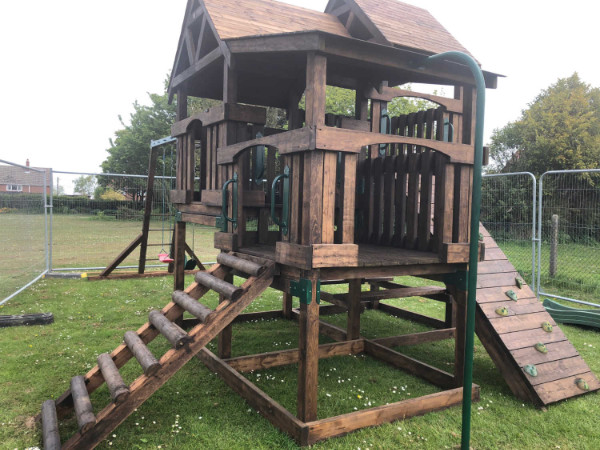 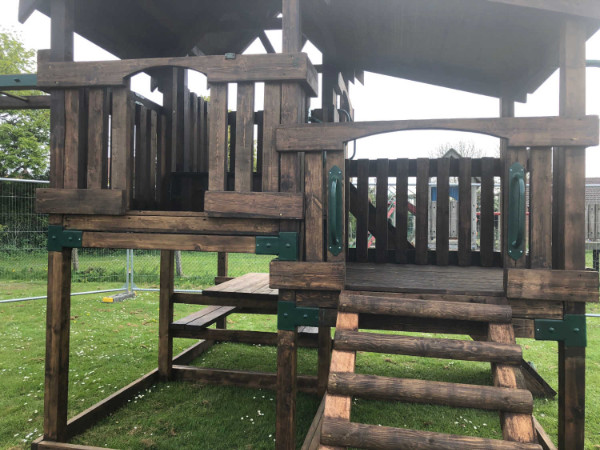 The next stage was to have the playground inspected to ensure that it met all regulations and was Health & Safety approved.

The inspection was carried out by The Play Inspection Company on behalf of the Parish Council and was extremely thorough, taking nearly all day to complete.

Gaps were measured, bolts were checked, swings and slides tested and verified as being safe.   Regulations are very tight these days and approval is required for insurance purposes. 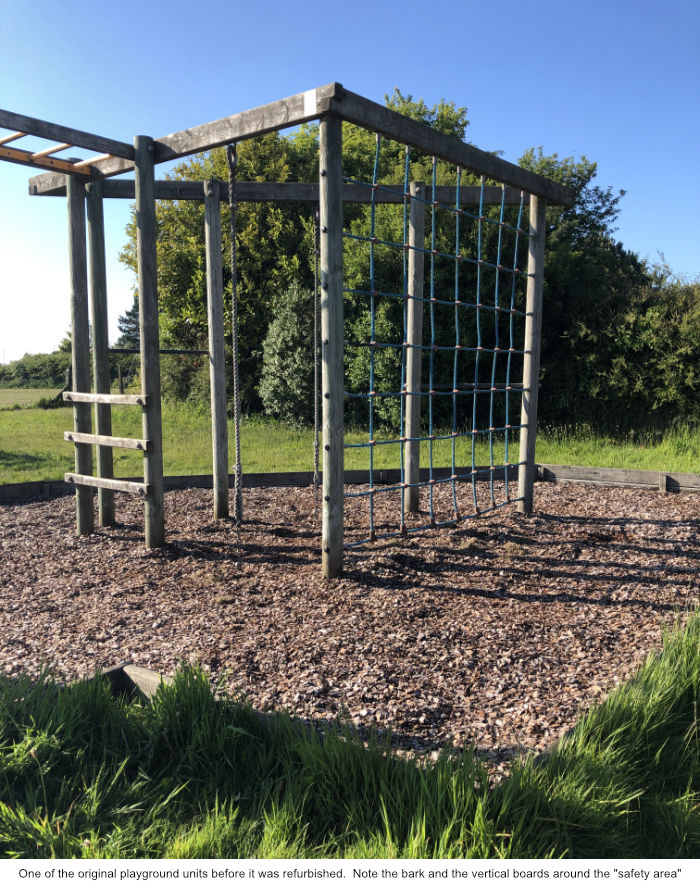 Right from the outset the council agreed that the safety of the children playing on the equipment was paramount.

When the council received the report we noted a number of points that it suggested should be addressed.   We asked ALS to do them all, even though some are not necessary, to ensure maximum safety for the children who use it.

We have received several glowing comments from Mums & Dads about how great the playground is for their children and that’s what makes all of our considerable efforts worth while… it’s why we did it!

To give our children a fun place to play safely 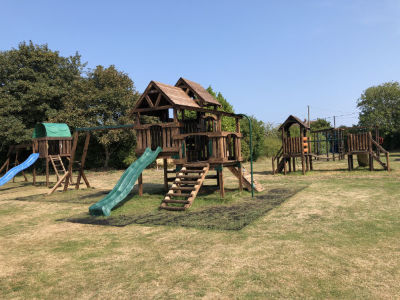 Mindless Damage to our Playground 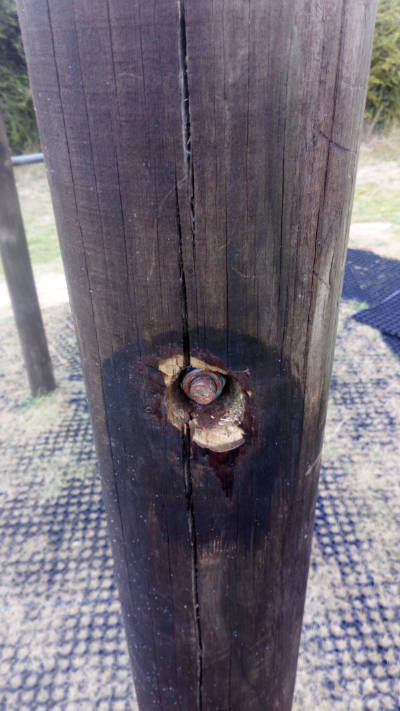 We have been stunned by four separate acts of malicious damage to the playground equipment, carried out in the last two weeks.

We are unaware of any reason for these nasty attacks which are deplorable in every sense of the word, the purpose of which can only be to cause harm or injury to children.   As a consequence, members of the council are checking the playground each morning to ensure the safety of children using the equipment during the day.

The matter has been reported to the Police who are looking into it and we would urge anyone who has information that could lead to the identification of the person/s carrying out these mindless acts of vandalism to let us or the Police know as soon as possible. 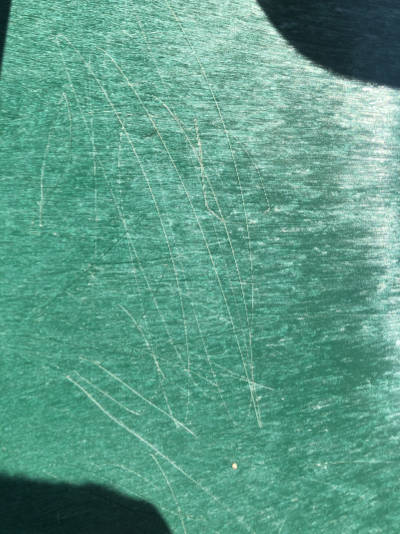 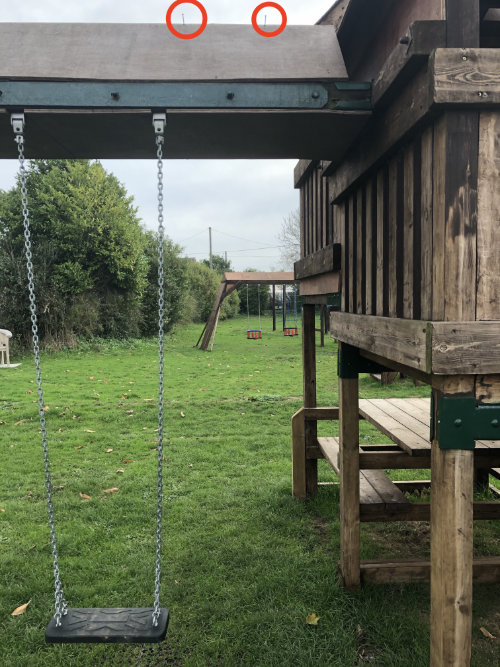 Once again we have been left speechless by further damage caused to the children’s playground.

In an obviously planned and premeditated attack on one of our children’s play frames, two fixing screws that hold down the cover above the swings were almost removed.   As the picture shows, had they been completely removed their removal would almost certainly not have been noticed by our councillors during their (now routine) checks.

Someone has obviously thought about this, identified these fixings as a target and gone to the playground prepared with the required tools because this act would have required a battery powered driver, probably a ladder and some considerable effort.

Why would someone do that?

The matter has also been reported to the Police and we would urge anyone who has information that could lead to the identification of the person/s who are going to so much trouble to cause malicious damage to our village playground to let us or the Police know as soon as possible.