In the light of some amazing historical finds in our parish over the last 25 years or so, we decided to do a deep dive into Knapton’a past to try and get a better idea of how our parish evolved over the last few thousand years and get a feel for our ancestors.

To do this, we started by referencing accumulated records from our local Knapton History Club (for which we are most grateful) and local resident’s knowledge.

Then we turned our attention to information that is freely available on the internet, starting with the Norfolk Heritage Explorer website.   This excellent site offers a unique opportunity to access an abridged version of the Norfolk Historic Environment Record which in turn is the definitive database of the county’s archaeological sites and historic buildings.   We have put several links to data recorded on this site as it contains over 60,000 records describing the archaeology of Norfolk from the earliest evidence for human occupation from 750,000 BC up to the present day and is an excellent source of reference for everything historical from our county. 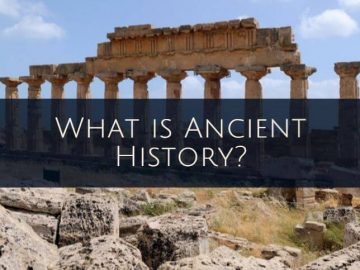 Firstly, a quick word about timelines.   Archaeology gives names to periods of time in order to divide the timeline of human technological evolution into functional periods of time, which gives us the Stone Age, the Bronze Age and so on.

However, it’s important to remember that timelines in architectural history refer to the rate of human development in a specific group of humans, not a specific number of years.   When a level of technological achievement is reached by that group it triggers the next timeline, the next era or age for that specific group of humans.   However different groups of humans both locally and around the world, developed at different rates so the timelines vary between these groups, sometimes by thousands of years.

You can read and in depth description of the list of archaeological periods here.

We’ve tried to keep it simple by only showing the timelines as they apply to humans in Britain and parts of Europe.

The Stone Age is the first period in the three-age system frequently used in archaeology to divide the timeline of human technological prehistory into functional periods and it too is commonly divided into three distinct periods; 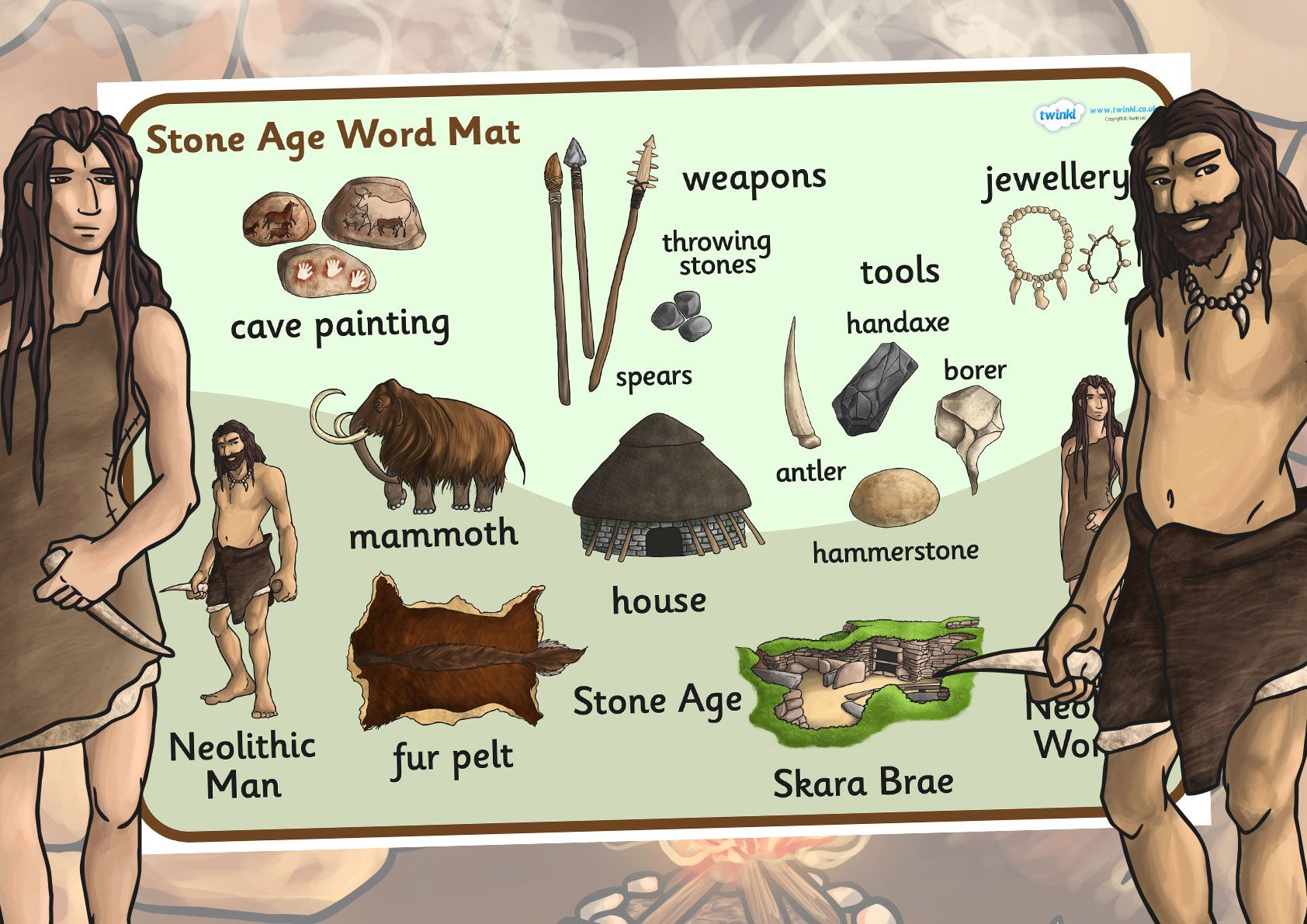 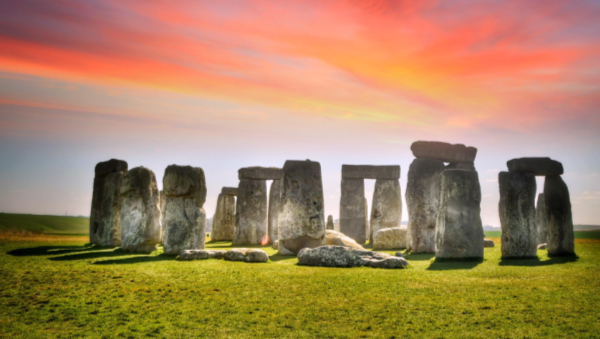 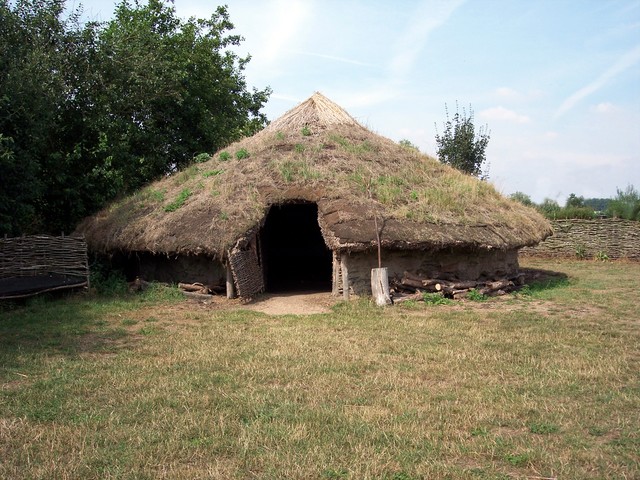 3,000BC to 1,300 BC (roughly)
An ancient civilisation is deemed to be part of the Bronze Age because it either discovered bronze (by smelting its own copper and alloying it with tin, arsenic, or other metals) or traded other items for bronze from production areas elsewhere.

Bronze was harder and more durable than other metals available at the time, allowing Bronze Age civilisations to gain a technological advantage for weapons and tools as the harder metal replaced its stone predecessors, and helped spark innovations including the ox-drawn plow and the wheel.

This time period also brought advances in architecture and art, including the invention of the potter’s wheel, and textiles – clothing consisted of mostly wool items such as skirts, kilts, tunics and cloaks. Home dwellings morphed to so-called roundhouses, consisting of a circular stone wall with a thatched or turf roof, complete with a fireplace or hearth, and more villages and cities began to form.

Organized government, law and warfare, as well as beginnings of religion, also came into play during the Bronze Age, perhaps most notably relating to the ancient Egyptians who built the pyramids during this time. The earliest written accounts, including Egyptian hieroglyphs and petroglyphs (rock engravings), are also dated to this era.

1300BC to 550BC (roughly)
The Iron Age is defined by archaeological convention and begins locally when the production of iron or steel has advanced to the point where iron tools and weapons replace their bronze equivalents in common use.
At the time, the metal was seen as more precious than gold, and wrought iron (which would be replaced by steel with the advent of smelting iron) was easier to manufacture than bronze.   More widespread use of iron led to improved steel-making technology at a lower cost. Thus, even when tin became available again, iron was cheaper, stronger and lighter, and forged iron implements superseded cast bronze tools permanently. 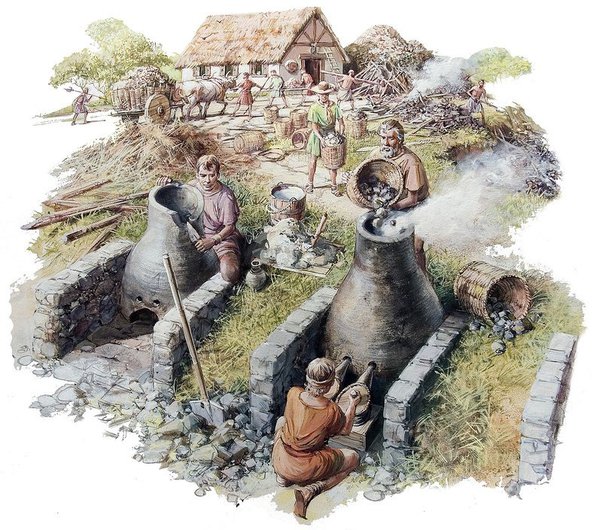 Making iron in the Iron Age

Along with mass production of steel tools and weapons, the age is characterised by an elaboration of designs in weapons, implements, and utensils.  These are no longer cast but hammered into shape, and decoration is elaborate and curvilinear rather than simple rectilinear

It saw even further advances in architecture, with four-room homes, some complete with stables for animals, joining more rudimentary hill forts, as well as royal palaces, temples and other religious structures.

Early city planning also took place, with blocks of homes being erected along paved or cobblestone streets and water systems put into place.

So, let’s start with what we know…

There are the probable remains of long since flattened burial mounds or barrows, only the marks of their surrounding ditches surviving. There are currently no Iron Age finds, but two square enclosure marks may be barrows from that time (NHER 13078).

Monuments
These are fixed assets that are identifiable because of their particular historical significance.

Ring Ditch
The term used to describe a circular ditched feature, often a round barrow that has been ploughed out until all that remains is the outer ditch. Ring ditches are often seen as crop marks because the ditches have become filled over time.

Roundhouse
Circular structure, normally indicated by one or more rings of post holes and/or a circular gulley, and usually interpreted as being of domestic function. These are generally thought to date to the Iron Age period.

Round Barrow
At its simplest, a round barrow is a type of tumulus, a mound of earth and stones raised over a burial placed in the middle. Hemispherical (think of an orange cut in half) in shape, they are one of the most common types of archaeological monuments and most of those built in Britain were built between 2200BC and 1100BC, so the Late Neolithic period to the Late Bronze Age.

Round Barrow
Late Neolithic and Early Bronze Age barrows tend to be roughly conical and cover usually one primary burial but also have secondary burials inserted into the mound later in the Early or Middle Bronze Age. Many round barrows had a circular surrounding ditch and bank but the form could vary greatly. It was common for subsequent ‘secondary’ burials to be inserted in and around these monuments, sometimes many years later. Round barrows are often found in conjunction with boundaries and it is unclear whether these existed when they were originally constructed or whether they formed a focus points when the boundaries were subsequently formed. 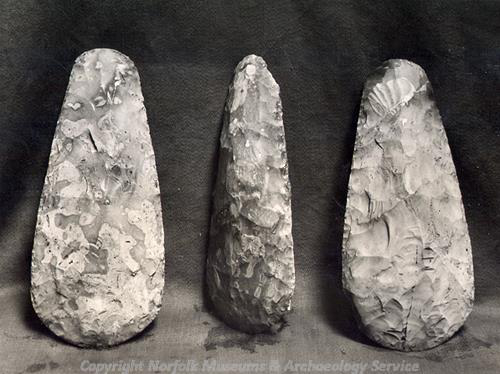 In 1950 a polished Neolithic axehead was discovered when a field close to the church was being ploughed up.

A late prehistoric piercer and prehistoric flint flakes were recovered while metal-detecting in 2010.

Three years later, in 1953, a hoard of seven flint axeheads were discovered in the same field.

An extract from the Norfolk County Website, Norfolk Heritage Explorer

You can visit this page here.

A Neolithic chipped flint axehead was ploughed up in 1959.

Forty two years later, in 1995, a prehistoric Saddle Quern (a stone with a concave upper surface on which grain was ground by using a rubbing stone) was found, again by a plough, in the same field.

It is complete except for hole, possibly worn through it or plough damaged in a very thin area and can be dated between the Lower Palaeolithic (or Old Stone Age) to Late Iron Age, so somewhere between  500,000 BC to 42 AD.

In 2007, while ploughing the field directly behind St Peter & St Paul’s Church, farmer Steve Hammond discovered a fascinating artefact.   Steve sent the item away to ascertain it’s provenance and has been provided with the following information.

Gilt T-shaped :images enamelled plate, the upper terminal from the vertical arm of a large crucifix, worn and bent, with an engraved and enamelled depiction of a standing figure of Saint Peter, holding a book in his right hand and a key in his left hand.   There are traces of white enamel on the face of the saint and dark blue enamel in the halo that has bordering concentric enamelled lines, the outer one white and the inner one red.
There are traces of dark blue enamel in the folds of the robe.   The horizontal upper edge of the plate is interrupted by a semi-circular projection, the edge of which follows the outside of the edge of St Peter’s halo.
The angles between the horizontal and vertical elements of the plate are convex.   The standing figure of the saint  is flanked by a rectangular arrangement of four rivet holes piercing a gilt field, one to one side of both shoulders and one in both corners at his feet.   The decoration on the field comprises lines of fine pecked dots within an engraved bordering line that contains fragments of pale blue or turquoise enamel.   There is an engraved triangle in the centre of the upper part of the reverse 62 x (unbent) 75mm.   Cf. terminal plaques illustrated in Enamels of Limoges 1100-1350 (1996), numbers 26, 62 and 67.   Late 12th century.